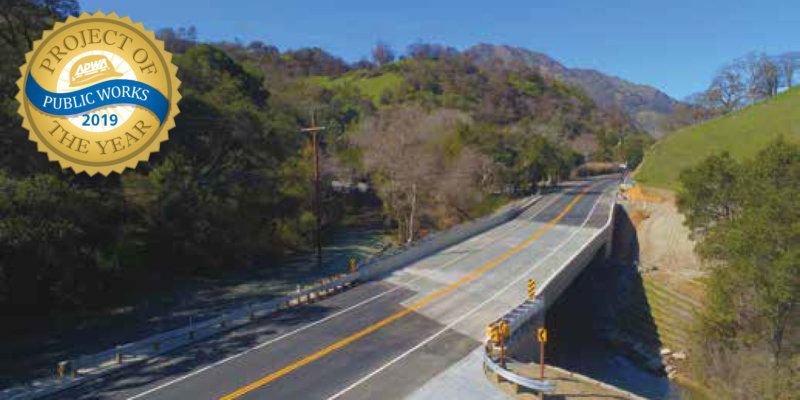 In addition to the new bridge construction, the project involved the removal of the existing steel girder bridge, installation of rock slope protection under the new bridge, realigning and reconstructing AC pavement, installing a soldier pile retaining wall, relocating an 8” water main attached to the bridge, and constructing new private driveways. The project was located in the unincorporated area of East Contra Costa County between Clayton
and Brentwood. There were several environmental restrictions for work in Marsh Creek including a critical May 15 to October 31 work window with a wide variety of federal, state and local protected species to work around. The objective of this project was to replace an existing structurally deficient and geometrically obsolete bridge with a new, wider, 100-year flood-compliant, bridge built to current safety standards, all while accommodating through traffic (6,000 vehicles/day) and minimizing the impacts to the local stakeholders.

The most important objective of this project was to construct this two- season project in one construction season and several Accelerated Bridge Construction (ABC) techniques were utilized. The most critical milestone was to meet the environmental permit restriction deadline of October 31, 2018 for work inside Marsh Creek. Given the late start of the project on April 30, 2018, completion of this project to satisfactory quality on schedule was the critical driver of this project. Four stages of construction and traffic handling were required to build the new roadway section, retaining walls, bridge, and driveways. The end result was a bridge that has two 12’0” lanes and two 8’0” shoulders. In order to construct the bridge substructures, a temporary wildlife-proof work area had to be created by utilizing man-made stream diversion within the creek. The team was posed with the challenge of building two independent bridges from the ground up, in the creek, from June 15 to October 31, which they success- fully completed.

The project team approved two special concrete mix designs, one with higher cement content and water reducers (Delvo), and another with concrete accelerant BASF MasterSet AC 534, which is pre-approved through Cal- trans. By using one of these mixes in the abutment pours, retaining walls and approach slabs, the contractor was able to shave off several days from the project.