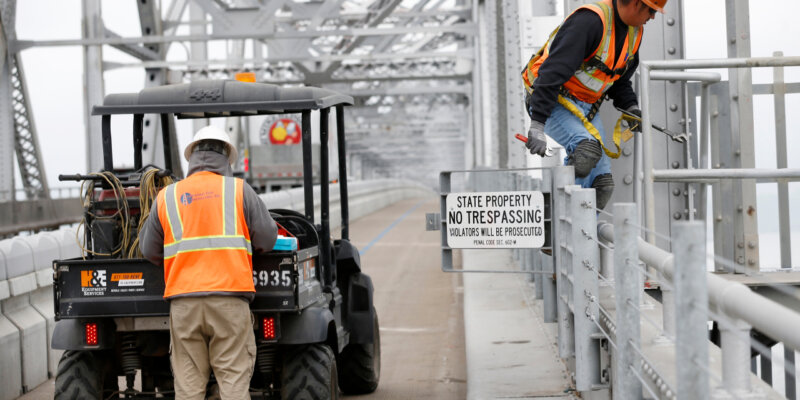 RICHMOND — Count Doris Mason among those who are in favor of the new bicycle and pedestrian lane opening Saturday on the Richmond-San Rafael Bridge.

The president of the Iron Triangle Neighborhood Council likes anything that provides new options to get people out of their cars and better connects Richmond with Marin County.

But Mason also can see why some people are skeptical: It’s unclear whether many bicyclists will want to make the four-mile trek across the undulating and unglamorous four-mile span.

“Where are you going, San Quentin?” Mason joked as she chatted with her friend Cheryl Maier at a Richmond coffee shop Friday morning.

Maier is among the skeptics. With more drivers relying on the bridge to get from their homes in Contra Costa County to jobs in Marin County and beyond, traffic backups stretch through Richmond every weekday morning. She would rather see the bridge’s right-hand shoulder, which was converted into the bike lane, used instead as a third lane for cars.

“You sit for a half hour in the mornings,” she said. “I can’t understand how bike lanes are going to improve that situation.”

Whether the lane will stick around permanently — or if walkers and bike riders will have a place on the bridge long into the future — is still up in the air.

The bike lane is opening as part of a four-year pilot program, one piece of a compromise between the Metropolitan Transportation Commission, county transportation agencies and bicycle advocates that also involved converting the shoulder of the bridge’s lower deck into a third eastbound lane during the evening rush hour.

While drivers credit that extra lane with easing afternoon traffic, there is a problem with doing the same on the westbound top deck: Even if the bridge had three lanes for cars, Interstate 580 between the bridge’s Marin County landing and the Highway 101 interchange currently is only wide enough for two cars.

“All it does is move the congestion from Richmond over to Marin in the mornings,” said Dave Campbell, advocacy director for Bike East Bay. “It doesn’t shorten anyone’s commute.”

The MTC will use the pilot program to study how popular the bike lane is and what happens with traffic on the span — for example, if congestion worsens, if accidents become more or less frequent, and if the loss of the shoulder means it takes longer to clear crashes and broken-down cars.

Meanwhile, the commission also is studying whether the more than 60 year-old bridge can handle the weight of a third lane of traffic on the top deck, as well as what it would take to widen the I-580 corridor to Highway 101.

Those studies are expected to wrap up in the spring. That’s when Damon Connolly, a Marin County supervisor who has questioned the need for the bike lane, and the county’s representative on the MTC, wants the commission to reexamine the pilot project and consider moving toward a future with three lanes for drivers on the bridge, at least during the morning commute hours.

“Traffic is increasing exponentially in the last several years on the bridge,” Connolly said. “The reality that commuters are facing is where I’m coming from in terms of looking for a potential solution.”

MTC officials say the number of cars passing through the bridge’s toll plaza during weekday morning commute hours rose by one-third from 2010 to 2018. Over that time, Marin County added nearly 7,000 jobs while approving less than 1,500 new units of housing. But public transportation options between Marin County and Contra Costa County remain limited.

Yet it’s not clear whether the $20 million bike lane will be enough to get people to make their commute by bicycle, and no one will hazard a guess about how many people may wind up biking or walking across the bridge.

While other Bay Area spans have bike lanes, the Richmond-San Rafael Bridge is far longer than the Golden Gate Bridge, the Carquinez bridge or the eastern span of the Bay Bridge. MTC spokesman John Goodwin called the bridge “completely uncharted territory.”

The span itself would only be part of the trip. The new lane links to bike paths on both ends, but it’s another 1.3 miles from the bridge’s East Bay landing to Point Richmond, and 4 miles to downtown Richmond and its BART station; downtown San Rafael is 3 miles from where the bridge touches down in Marin County.

Then there’s the bridge itself, which rumbles and rattles noticeably whenever a big truck goes by, and unlike the better-known spans to the south, this bridge is unlikely ever to appear on postcards for its looks.

Bike riders and walkers are much closer to traffic on the Richmond-San Rafael Bridge than they are on other spans. The lane is separated from traffic only by a movable concrete barrier, with no railing or other shoulder, meaning cars and trucks are just a few feet away as they barrel down the freeway at speeds of 50 miles per hour and higher. The noise of tires and diesel-belching trucks is so loud that it can be difficult to hear someone talk even if they’re walking alongside you.

The effect is particularly intimidating as you travel east toward Richmond, when it feels as if you’re nearly walking into the oncoming traffic.

Still, bike advocates say the new lane has plenty to offer. The link between the East Bay and Marin County stretches of the Bay Trail has been years in the making.

“It opens things up so we can explore so much more,” said Najari Smith, a cycling activist and founder of the Richmond bicycle shop Rich City Rides. Smith, who leads groups of young riders on bicycle trips to parks around Berkeley and Oakland, already is planning trips to Marin County destinations such as China Camp State Park.

And he noted that people will at last get to enjoy the bridge’s excellent views without having to focus on the traffic around them.

On one side is a panorama from the East Bay hills to Mount Tamalpais, with the Oakland and San Francisco skylines, Yerba Buena and Angel islands and the Bay and Golden Gate bridges in between them — though the view is occasionally interrupted by passing vans and trucks. The other side is an unimpeded view of the Richmond hills, North Bay peaks, San Pablo Strait and East Brother light station.

“If you’re in a car, you’re only going to notice the bridge,” Smith said. “When you’re on a bike, you can see everything.

“Being outside the confines of four steel walls is something to experience.”