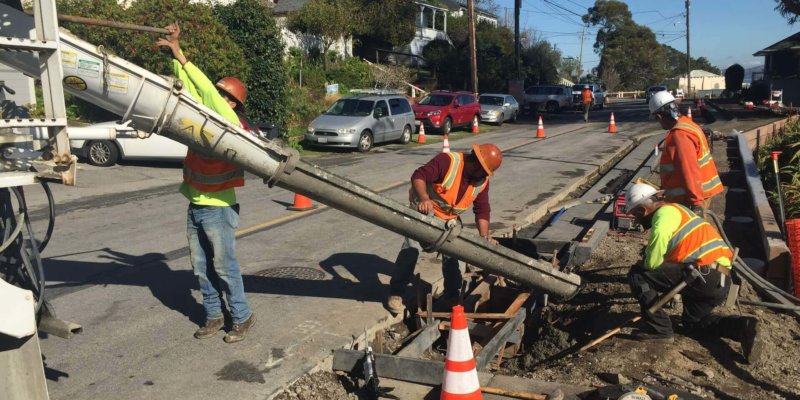 San Rafael, CA – The community of San Quentin Village is now enjoying a much improved stretch of Main Street. The Marin County Department of Public Works (DPW) completed a project last week that renovated and upgraded a 1,300-foot length of sidewalk from San Quentin State Prison to the Highway 580 transit stop.

Work began in August 2016 on the $676,363 project, which involved the building of a new, five-foot wide sidewalk along the entire south side of Main Street. Improvements were made throughout the corridor, including two new retaining walls and curb, gutter and drainage upgrades. Accessibility curb ramps,
pavement striping and new road signs were also installed.

The project was funded by a grant from Metropolitan Transportation Commission as part of their Safe Routes To Transit (SR2T) initiative, which seeks to help make public transit more accessible.

San Quentin Village is an unincorporated community just east of the prison. Historically inhabited by prison employees and their families, the community has diversified and grown over the years. The sidewalk route from the prison to the public transit stop at Highway 580 is heavily used by residents, prison employees and visitors of inmates. However, the condition and design of the previous route proved to be a challenge for some travelers.

“This is a significant change for that community and its visitors,” said Ernest Klock, DPW’s Principal Civil Engineer. “The newly completed improvements have made the route safer and more accessible to all levels of pedestrian traffic.”

The bus stop at the I-580 onramp soon will receive a shelter from the Bay Area Toll Authority. The shelter addition was a key element in securing the project’s SR2T grant. This is the first County of Marin project funded by the SR2T program.